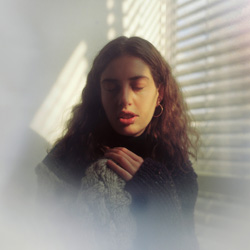 Ever since moving to Berlin in 2005, Bulgarian-born boom-pop sensation DENA (born Denitza Todorova) has been working on her signature sound, a unique brand of pop, R&B, 90s-inspired dance and hip-hop, and native Balkan beats. After her single "Cash, Diamond Rings, Swimming Pools", later released as an EP on Kitsuné, went viral in summer 2012, DENA has received praise from international media (e.g. Der Spiegel, Guardian, Dazed & Confused, Fader), as well as wowing audiences at SXSW, clubs and festivals around Europe and supporting bands such as Das Racist, Icona Pop, and The Whitest Boy Alive.

In 2014 she unleashed her debut album Flash, created together with producer and engineer Jonas Verwijnen, a collection of bass-heavy songs about the ever-increasing pace of human life in the digital era, friendship, trust vs. disappointment or girl power.
DENA released the 4 track EP "Trust" in 2016. Its lead single "Lights, Camera, Action" was presented on Pitchfork and set the mood for this new exciting development in DENA's production and writing style.

DENA is currently putting the final touches on her second album, which is being recorded and produced between London, Berlin and New York.

LIONOIR
Just as Sara Zlanabitnig and Gloria Amesbauer face each other on stage, Lionoir's singing and instruments also relate to each other: in dialogue, in contradiction, in a common take-off. With bass, synths, samples and various effect devices, the two multi-instrumentalists create a unique sound and mood between unteachable melancholy and grown clarity. In collaboration with B. Fleischmann as co-producer and drummer July Skone (Gudrun von Laxenburg, PRAQ), they created multi-layered numbers with a clear self-image, which appear on their debut album "Infinity".

Fem*Friday, presented by kulturen in bewegung and Weltmuseum Wien, is a concert series putting a spotlight on exceptional female* musicians to conquer the man-dominated music business and concert-stages.