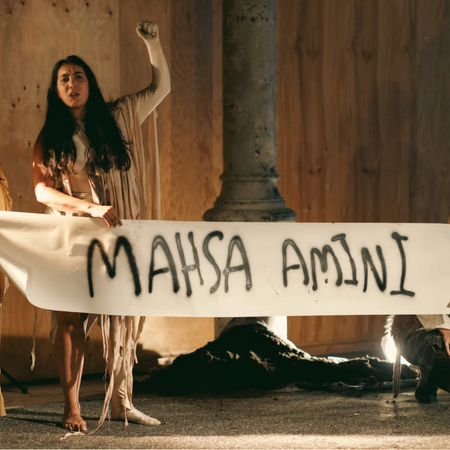 The current scene on the streets of Iran reflects the end of the people's patience. Especially that of women, who since the Islamic Revolution of 1979 have no longer been allowed to decide entirely about themselves and their bodies. For too long, they have had to be told how to behave and dress. For too long they have carried the pain of their parents' generation within them.

The murder of Mahsa Amini on September 16 by the so-called morality police was the straw that broke the camel's back and triggered a worldwide wave of protests. Countless people in Iran, of whom the majority are women under 30, have since been putting their lives at risk on a daily basis to stand up for women's self-determination. The number of injured, arrested and murdered citizens is increasing, but the voices of protest in the streets, "Jin, Jîyan Azadî" in kurdish, "Zan, Zendegi, Azadi" in farsi and "Frau, Leben, Freiheit" in german, are getting louder and louder.


What can each and every individual do to help?

Inform yourself, share articles and talk about the it!
Due to the fact that the population in Iran has only limited internet access and the local news reports little about the current situation, it is important to raise awareness about the situation in Iran.

Visit demonstrations!
Iranians risk their lives by protesting for basic human rights on the streets of Iran. Iranians who attend demonstrations outside of Iran risk ever being allowed to enter Iran again without concern. Support Iranians by using your voice.

Abdorrahman Boroumand Center - بنیاد برومند
A non-profit and non-governmental organization for the promotion of human rights and democracy in Iran.
https://omnilink.iconosquare.com/page/IranRights

6Rang (The Iranian Lesbian and Transgender Network) was established following the first Iranian lesbian and transgender gathering held in 2010.
https://6rang.org/english/donatio/