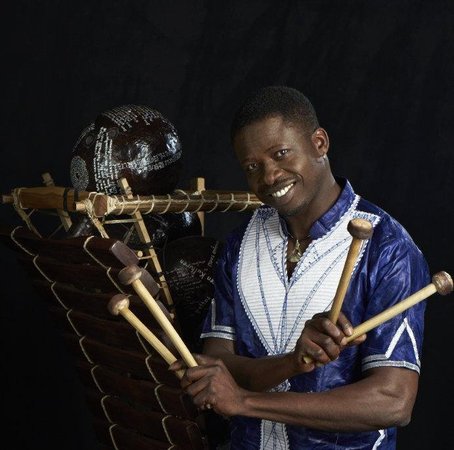 Balafon, N'Goni
Comes from a griot family in Burkina Faso, where music making has been a family profession for generations. On the national instrument of Burkina Faso, the balafon, he developed a virtuosity that makes him one of the best musicians on this instrument worldwide! Mamadou Diabate lives and works in Vienna. He composes, sings and plays balafon as well as various rhythm instruments. After six released albums and countless concerts, it is hard to imagine the world music scene in Central Europe without him. Collaboration with Andre Heller, Kurt Ostbahn, Wolfgang Puschnig, Christian Kolonovitz, Martin Grubinger, Arkady Shilkloper and others. Winner of the Austrian Worldmusic Award 2011 and the most important African Balafon Competition: Prix Alkaly Camara de la virtuosité 2012.